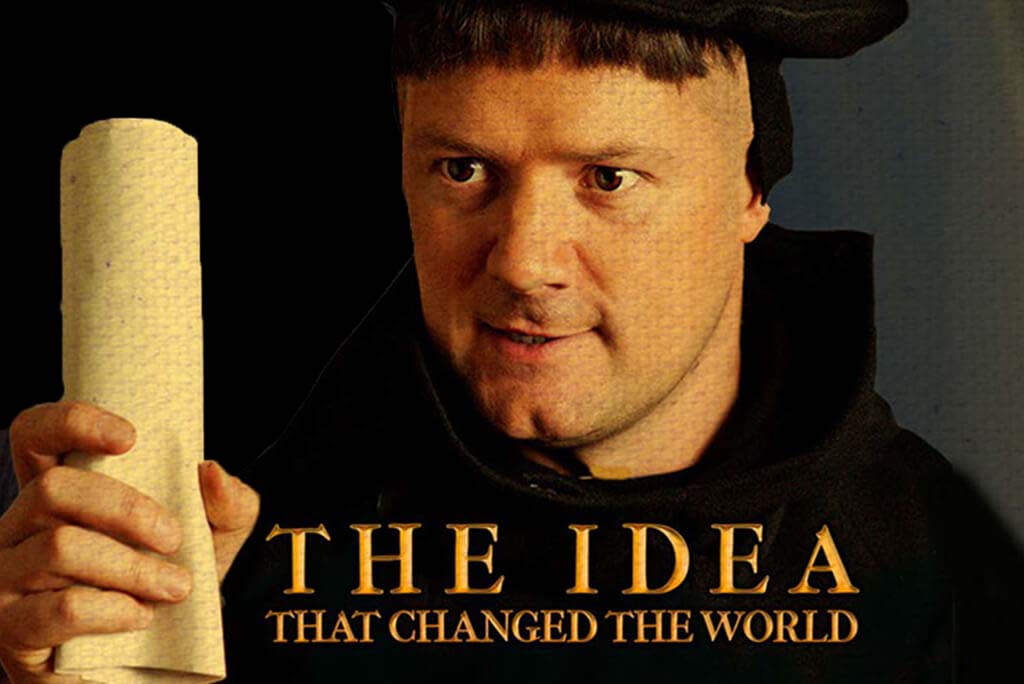 We left off last time with the close of the Diet of Worms where Martin Luther informed the august assembled officials of both civil government & Church, that he’d not recant what he’d either written or said, because his opponents weren’t able to refute him with Scripture.

From the now emerging Protestant perspective Worms was a turning point from which there was no going back.

Reading of the events in that improvised hall in the German town of Worms, we get the idea that Luther issued his memorable declaration of devotion to Scripture & conscience, then strode from the room to the cheers of the supporting German nobles and chagrin of his imperial and Roman opponents. And that was that. The Trial was over.

Not so fast. Luther’s speech in fact did NOT close the Diet. His words weren’t the last. Emperor Charles V’s secretarial spokesman who was conducting the inquiry replied to Luther on that April day in 1521. He deserves also to be heard. He re­buked Luther for making himself superior to the historic Church Councils that had already ruled on several of the issues Luther declaimed. Regarding Luther’s arrogance in supposing he could sit in judgment on The Church, he said, “In this, you’re completely mad. For what purpose does it serve to raise a new dispute about matters condemned through so many centu­ries by church and council? Unless perhaps a reason must be given to just anyone about anything whatsoever. But if it were granted that whoever contradicts the councils and the common understanding of the church must be overcome by Scripture passages, we will have noth­ing in Christianity that is certain or decided.”

The secretary raised an important point; one Roman Catholic apologists would keep asking of Protestants in the decades to come. Luther had famously said his conscience was held captive to the Word of God. The secretary came back with the reply in effect, “People who want to put their own spin on the meaning of Scripture have been claiming that for a long time. What makes you, a humble German monk, better equipped to interpret Scripture than the august luminaries of the Church’s history? If and when personal conviction replaces the official, authorized position of the Church, derived not by one person’s opinion, but a collection of several experts, then the Christian religion will shatter into a bo-zillion pieces.

And in some ways, that was a prescient appraisal of things to come.

Next day, April 19, while Luther was locked in private disputes with representatives of the Emperor & Pope, Charles had a document he’d written read out to the gathered German nobles. He reminded them he was descended from a long line of faithful defenders of The Faith from Germany, Spain, Austria, & Burgundy. He wanted it made clear that he was no novice in the theological disputes heard at Worms. He wasn’t at all impressed with Luther or his position. He said, “It’s certain that a single friar errs in his opinion which is against all of Christendom and according to which all of Christianity will be and will always have been in error both in the past thousand years and even more in the present.” He made it clear that he understood his role at the trial as being called on to join his noble ancestors and defend the Faith against an attack that threatened to irreparably splinter it. He at least, got that part right. The Church was never the same after the Diet of Worms.

As we ponder Luther’s address—looked at in the last episode, and these responses by his imperial and ecclesiastical opponents, we realize what was really at stake at Worms. Once again, History provides us 20/20 vision. The Western Church was split now into 2 great camps; Protestant and Roman Catholic. That breach has lasted 500 years. But it also presaged the rift between civil and ecclesias­tical power. Civil rulers of all ranks broke with Rome in becoming Protestant. Others, remaining Catholic, realized now how much the Rome needed them.

A more subtle idea was introduced at Worms that took a while to germinate in the soil of Europe, but once it did, it would have far-reaching consequences. It was the idea, expressed so articulately by Luther, that the individual person, no matter what their social rank or economic status, possessed a dignity and conscience that trumped the man-made rankings of church and state. That idea was regarded by the Charles & his nobles as a supremely dangerous idea; far too dangerous to allow. Heaven forbid a peasant would see himself as possessing the same value as a baron; or a layperson as a cardinal. Why, that would set the whole world upside down.

And so it did.

Let’s back up in time now to track how that particular Martin Luther arrived at Worms in April 1521.

He was born 30 miles NW of Leipzig in the Saxon mining town of Eisleben in Eastern Germany in 1483. He was 9 when Cristoforo Columbo staggered ashore in the New World & the Moors were finally pushed out of Spain. Europe was rapidly emerging from the lethargy of a long out of date feudalism that had hampered growth.

His father gave Martin the best education in law the Luther’s could afford, hoping he’d become a town councilor; a position from which to ride to comfortable prosperity. But as Martin matured, so too did his sense of self. His ambitions turned form worldly success to a desperate longing to know he met God’s approval. But the more he reached for it, the further away it seemed. In 1505, at the age of 22, he made good on an oath he’d made to God and entered an monastery in Erfurt. That oath was made during a freak lightning storm that terrified Luther. He swore if God preserved him, he’d become a monk. He didn’t die, so Luther made good on his pledge. This gives us an idea of the sober integrity of the man.

Living in a cloister as a young monk, we’d assume Luther saw himself as earning points with God. After all, that’s certainly the way most monks viewed it. Not our Luther! It seemed like every good deed he did, every meritorious work his superiors suggested, only served to increase Luther’s sense of guilt. His personal confidant was the godly & wise, Johann von Staupitz. Luther regularly lamented his deplorable sinfulness to the elder Staupitz who tried several tactics to help the earnest young man rid himself of his crippling sense of guilt. Nothing worked. So Staupitz suggested Luther distract himself by immersing himself in the study of Scripture. He then arranged for Martin to take an advanced degree in theology tpo the end he’d begin teaching at a university and put all his nervous energy to good use. So, just before turning 30, Luther began teaching Scripture at the new University in Wittenberg.

The demands of being a monk and professor certainly gave Luther much to do. But it wasn’t enough to keep him from his quest for personal holiness. The more he wanted it, the more elusive it became. He knew he was supposed to love God but his increasing frustration was coming out in a loath for the Deity that further afflicted his soul. He was on the verge of an emotional breakdown. The Gospel promised forgiveness, but the Church said penance was the way to expunge the souls of the sense of guilt. Why then, after availing himself of literally EVERY form of penance the Church prescribed, was he MORE guilty than ever?

It was as Luther taught his students in Wittenberg the words of the Apostle Paul in Romans that the light BEGAN to come on for him. I say “began” because while there was indeed a moment when it seemed the switch flipped, the implications of what Luther discovered echoed through his soul for months after.

You see, Luther was consumed with being righteous before God. Following the understanding of the Church of his day, he assumed righteousness was something a person secured by doing the prescribed good deeds. Oh and hey, if you couldn’t produce your own righteousness, you could buy something called an indulgence; a special certificate offered by the Church that drew on the surplus of righteousness the saints had laid up in heaven for needy souls – called the “Treasury of Merit.”

But now the righteousness of God apart from the law is revealed, being witnessed by the Law and the Prophets, even the righteousness of God, through faith in Jesus Christ, to all and on all who believe. For there is no difference; for all have sinned and fall short of the glory of God, being justified freely by His grace through the redemption that is in Christ Jesus, whom God set forth as an atoning sacrifice by His blood, through faith, to demonstrate His righteousness, because in His forbearance God had passed over the sins that were previously committed, to demonstrate at the present time His righteousness, that He might be just and the justifier of the one who has faith in Jesus.

Luther later said that as soon as the realization came to him that it’s not his righteousness but God’s that saves, suddenly a slew of other passages came flooding into his memory affirming and adding further insight. It was like a key and been slipped into a lock that opened the door to a mansion of blessing. All of Scripture took on a new color, scent & flavor.

Prior to this revelation, that is earlier in his studied in Romans, Luther had struggled with a passage in ch1 where Paul in vs16&17 says à

For I am not ashamed of the gospel of Christ, for it is the power of God to salvation for everyone who believes, for the Jew first and also for the Greek. For in it the righteousness of God is revealed from faith to faith; as it is written, “The just shall live by faith.”

Martin says that perplexed him and began him thinking his understanding of righteousness might be off. What was this reference to “the righteousness of God.” And how does faith issue into justification? With the insight of ch3, now he knew. Righteousness is a gift God bestows by faith.

But this isn’t what threatened the Religious Establishment. Luther later acknowledged there were many others who’d taken a spiritual journey similar to his. Augustine in the 4th C., the Bohemian reformer Jan Hus a C before Luther and the Dutch pastor John Wessel a couple decades before. No, it wasn’t Gift Righteousness that Catholic officials were concerned about. It was Luther’s insistence the Church had gone off the rails in many of its everyday practices. Those practices clouded the glory of a soul set free by God’s grace. And he was determined to do something about it. What brought him to the attention of those who’d eventually come out against him was his assault on the sale of indulgences, by which not a few Church officials were getting rich, including the Pope.

We’ll pick it up at this point in our next episode. 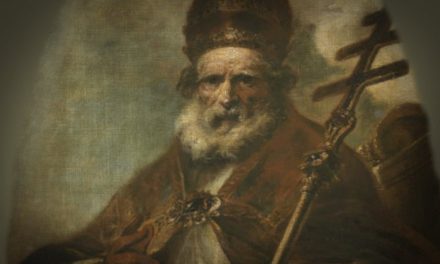 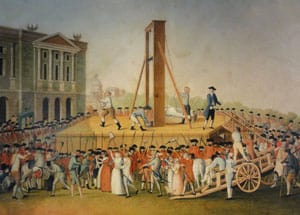 142-Off with Their Heads 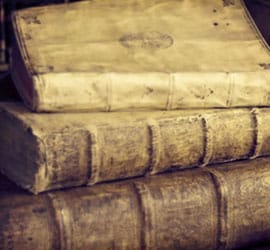